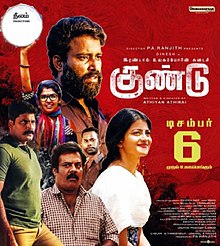 Irandam Ulagaporin Kadaisi Gundu (transl.?The last bomb of World War II), also known simply as Gundu (transl.?Bomb), is a 2019 Indian Tamil-language drama film directed by newcomer Athiyan Athirai. The film stars Dinesh and Anandhi in the lead roles. Produced by Pa. Ranjith under his banner Neelam Productions, the film focuses on the fictional story, inspired from the true events from World War II. The film has cinematography handled by Kishore Kumar, while the music is composed by Tenma.[1][2] Released on 6 December 2019, the film received critical acclaim from critics and audiences.

Selvam (Dinesh) is a lorry driver for an iron scrap yard. It is run by Basha Bhai (G. Marimuthu) who decreases his salary because there is always iron missing when he is done his job. Selvam’s dream is to marry his girlfriend Chittu (Anandhi) and buy his own lorry like his dad dreamed of but he cannot since her family despises his job and thinks he’s a thief. Meanwhile World War II bombs are washed up on shore near Orissa which a AlJazzera reporter Tanya (Riythvika) wants to uncover the bomb since it made her an orphan. The Minister and another company boss (John Vijay) working with them want to stop her. The police are ordered to kill Tanya and her friend Sugi. Selvam decides to pick up his last load. In his load, the bomb is found but he thinks it is brass and leaves it in the load. Selvam and his co-worker Puncture (Ramdoss) go to the Chennai iron melting place. Meanwhile, Chittu is planned to be killed by her relatives since she uncooperative with them. She escapes and meets with Selvam. When the reach the place, the boss of the place rejects the bomb and tells Selvam it is a bomb. Selvam panics and Chittu is kidnapped by her relatives. Selvam and Puncture decide to hide the bomb but reconsider their idea when they hide it near a school. Tanya and Sugi, running away from the police, meets Selvam. Puncture accidentally tells Tanya and Sugi that they have the bomb they are looking for. Selvam decides to help Tanya after she explains her story. They find the bomb from a fake priest. Chittu escapes from her relatives and goes to meet Selvam. Selvam has a fight with the police and Chittu’s relative, which he kills. The police officer takes the lorry which the bomb is in. The police officer runs over Puncture’s leg and tries to escape. Selvam fights with the police and goes to kill him but doesn’t. Selvam is wrongly accused of taking the bomb and arrested. A few months later, Selvam succeeds his dream and the Minister is arrested. 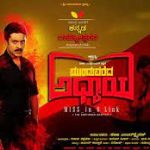 The Black Cat (2021)
Note:  Because this project is categorized as in development, the data is only available on IMDbPro and is subject